Fu for You and Me!

As we approach the release of Out for Blood and the celebration of Doomtown: Reloaded’s fifth anniversary. We’ll be bringing back some of the old design diaries, by previous play-testers and designers. Some terminology, such as faction names, may be out of date, but we felt it was important to present these as written.

Kung Fu for You and Me!

I joined the playtest team in 2014 when Db0 put out a call for more people to help out. The first thing I noticed was AEG weren’t putting out just one new outfit, but two, the second of which came as a complete surprise to me: the 108 Righteous Bandits.

I am not here to talk in-depth here about the different styles of play The 108 will be bringing to the game (surprises are good!) but I am going to introduce you to one of their main aspects: a completely new mechanic to Doomtown: Reloaded called Kung Fu.

Now for all you folks that played Classic, I am sure that you remember Kung Fu and are now having certain thoughts (I know I did). However, you would do well to forget everything that you know about the mechanic from previous versions. The name is the only similarity; Everything else is totally (and awesomely) different.

There are two characteristics that we need to be aware of in Kung Fu: the dudes and the Techniques (action cards).

I’m going to start by looking over a dude: Xui Yin Chen. She’s a value 4, 1-stud and 2-influence, who has a Kung Fu trait of 3. She also has a great ability in that she can boot to turn your posse into studs and gives them +1 influence during a shootout (great for taking control of locations and using their abilities such as Carter’s Bounties).

Traditionally, she would have a grit of 7. However, this is the first difference with Kung Fu. A dude’s Kung Fu rating is added to their value while in play. This is really important. So while her value is 4 when she’s in draws or pulls, her value in play is actually 7. This also means her grit is 10!

The other half of the equation is the action cards for Kung Fu, known as Techniques. While there are some standalone Techniques, many of them are broken down into sets called Taos, and the first set that we will meet is called the Tao of Zhu Bajie.

The way it works is that when you wish to play a Technique, you must choose a dude with Kung Fu and pull. If the pull is lower than the dude’s value, it succeeds; if the pull is equal to or higher than the dude’s value, it fails. Simple as that. This is why adding the Kung Fu rating of your dudes onto their value is so important. In Xui Yin Chen’s case, she will succeed any Kung Fu technique pull as long as you pull 6 or less.

Let’s take for example one of the technique cards, Zhu’s Ferocity. This is a shootout Technique that simply gives one of your dudes +1 bullets and one of their dudes -1 bullets. It also has a value 2, so it fits in nicely with the requirement of pulling below a dude’s value.

Now at first glance, it doesn’t seem that impressive, considering other cards are available such as Quick on the Draw, which doesn’t need a pull and does more. However, you will notice that it has a second section starting with the word ‘Combo’. If you meet the combo requirements listed on a Tao (in this example having your bullets be higher than the opposing dude you targeted), you may immediately play another Technique of the same Tao from either your hand or your discard pile. Yes you did indeed read that correctly; your follow-up card can come from your discard pile directly!

As awesome as that sounds, there are three things you have to remember when performing a combo: You have to stay within the same Tao (in this example, the Tao of Zhu Bajie), your next card cannot have the same name as the one you just played, and finally you may only combo a number of times up to your dude’s Kung Fu value. In Xui Yin Chen’s case, that would be three times, which is her Kung Fu rating, allowing up to four techniques to be played in a row … one for the initial card and then a maximum of three additional cards via combos.

So for a working example of this, Xui Yin Chen calls out Milt Clemons (remember Milt is a 2 stud, value 8 Sloaner) who foolishly accepts and is about to get Kung Fu’d to the face!

Let us assume we have Raking Dragons in our hand. This card allows you to boot an opposing dude in a posse and lower their value by 2. If you meet the combo condition of having a higher value than them, you can then immediately begin a combo!

Our Xui Yin Chen’s first action is to play Raking Dragons, booting Milt and lowering his value to a 6. As she now has a higher value than Milt (remember that she’s a 7 total with her Kung Fu), she can combo. Out of the discard pile, we fetch and play Zhu’s Ferocity, raising her bullets to 2 and lowering Milt to 1. Once more we can combo as we now have more bullets than Milt, so we could continue with Raking Dragons again, or another Tao of Zhu Bajie Technique, but not Zhu’s Ferocity.

Now in case you’re thinking “I only need two cards and I can keep repeating them!”, do not be alarmed. The limit is that you do not discard shootout Tao cards until after all shootout plays have ended, just before you draw for your shootout hands, thereby stopping people from repeatedly playing the same two cards back out of their discard pile.

There are also some Taos that don’t have combos on them. These can be thought of as finishers. They will always end that particular combo run but are usually far more powerful. You’ll notice that very often such finishers get more and more effective the more Techniques of the same Tao you’ve managed to land before. They also allow you to play them straight out of your hand, but their effect is usually diminished without the appropriate setup.

It is also worth remembering that you play combos immediately after each other so your opponent does not get the opportunity to do anything between Taos unless they have a react, unlike with normal shootout actions.

So that is a brief look at Kung Fu. It’s quite a bit to take in initially, but it works really well when you get to play it, leading to some great and exciting fights!

Hopefully, you found this introduction helpful and you will fall in love with The 108 as much as I have! Just keep in mind that Kung Fu is merely one of the 108 Righteous Bandits tricks coming you way … 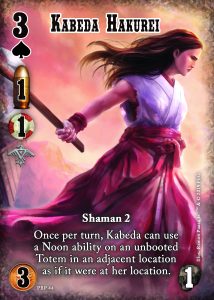