An Evolving Tabletop Game set in Theah’s Most Interesting City 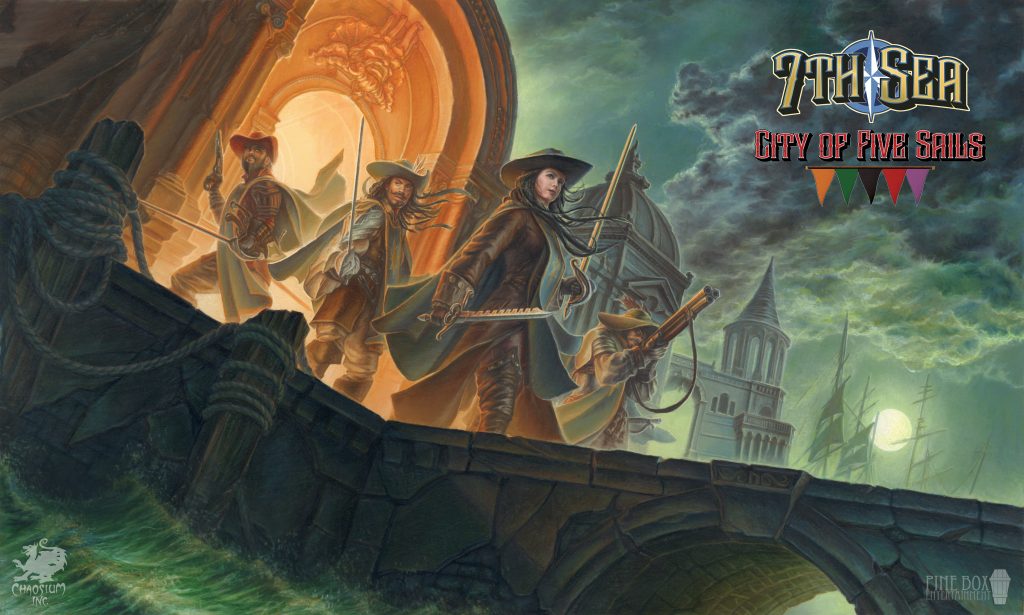 Pine Box Entertainment is proud to announce the development of a new experience for 7th Sea fans in the form of a hybrid card game/board. Folks familiar with our Doomtown game will find familiar concepts in area control and a player driven storyline. Players will choose a Faction vying for control of the City of Five Sails. Their Leader and Crew, along with hired mercenaries will battle and duel over three Locations with the city. Throughout the game, they must use Influence, Brawn, and Finesse to outmaneuver and defeat their opponent. Five Sails is a port city with five districts representing the five countries surrounding its border. But most importantly, it is itself a free city, operating independently from any of those outside influences. As such, it is a frequent destination for travelers, explorers, pirates, people wishing to hide, and those who are looking for them. Not only are there inhabitants from the five border countries, but the city is a hub of activity for traders and pirates from all over Théah. This makes Five Sails’ population as diverse and random as its interpretation of laws.

Five Sails is a game of swashbuckling, sorcery, piracy, adventure, political intrigue, and skullduggery within the city. This is not a game of naval combat. While we did not go back to the format of the original 7th Sea CCG, we believe that Five Sails retains the heart and soul of the original game at its core. We will feature key elements from the 7th Sea roleplaying game, incorporated into a rich, storyline driven tabletop experience. Players engage in combat duels that go back and forth with impending damage. Parry, riposte, and thrust at your opponent with the assistance of plot cards and attachments to damage and eliminate opposing crew members and mercenaries. Each Leader has their own unique playstyle with additional ways to obtain Hero Points, and forge a path towards victory. Alternatively, controlling the locations or assassinating the enemy leader will lead to domination over the city. 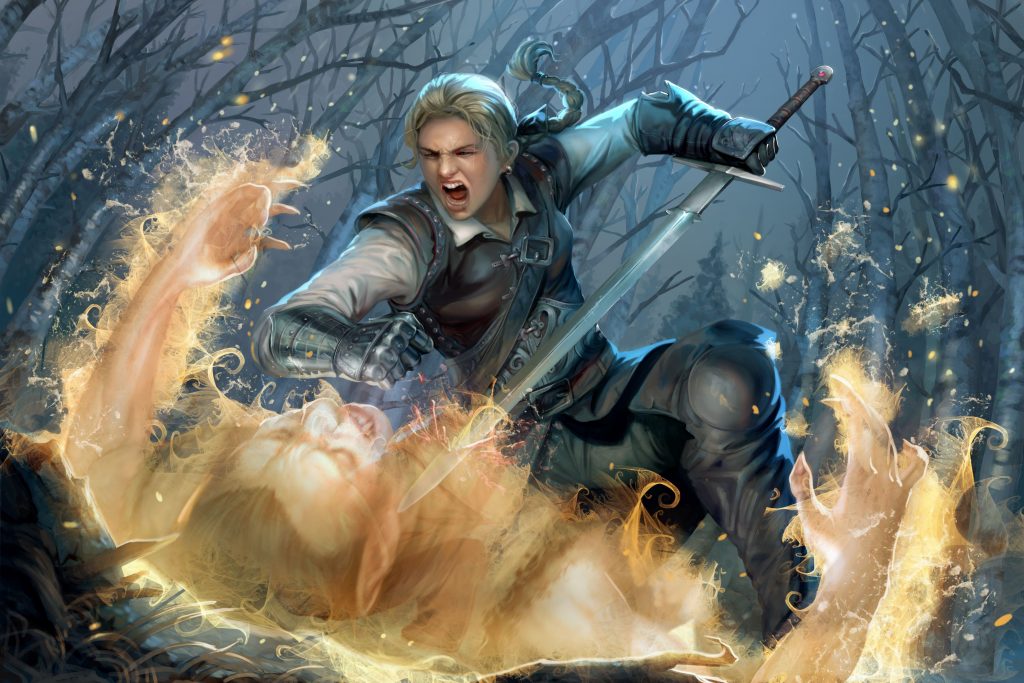 Each Day players will reveal a Scheme card that helps determine their goal for the turn. A communal mercenary deck will reveal Events, Artifacts, and Characters at the locations that players can Recruit to aid their cause. Setting the game in the City of Five Sails gives us the freedom to build a solid ongoing story and depiction of various nationalities and secret societies that bring more of the flavor of the world into the game.

We anticipate the first interactive, player driven storyline experience as a key part of our inaugural world championship at GenCon 2022. At this tournament and through local organized play, players will be able to determine the direction of the storyline fiction. Players will also be able to alter the communal mercenary deck for future expansions, as the city and storyline evolve with an expanding card pool and additional factions. The key thing about the mercenary deck is that each card bears a unique number. As the story progresses, characters may permanently join a Leader or new events disrupt the City of Five Sails. When this happens, a new card with that number will be printed to update this communal deck, replacing the one that is going away. This way we can keep the ebb and flow of the bustling, dynamic port city alive over time and keep you on your toes along the way. The cards used for the current pool will be noted and provided at organized play gatherings. 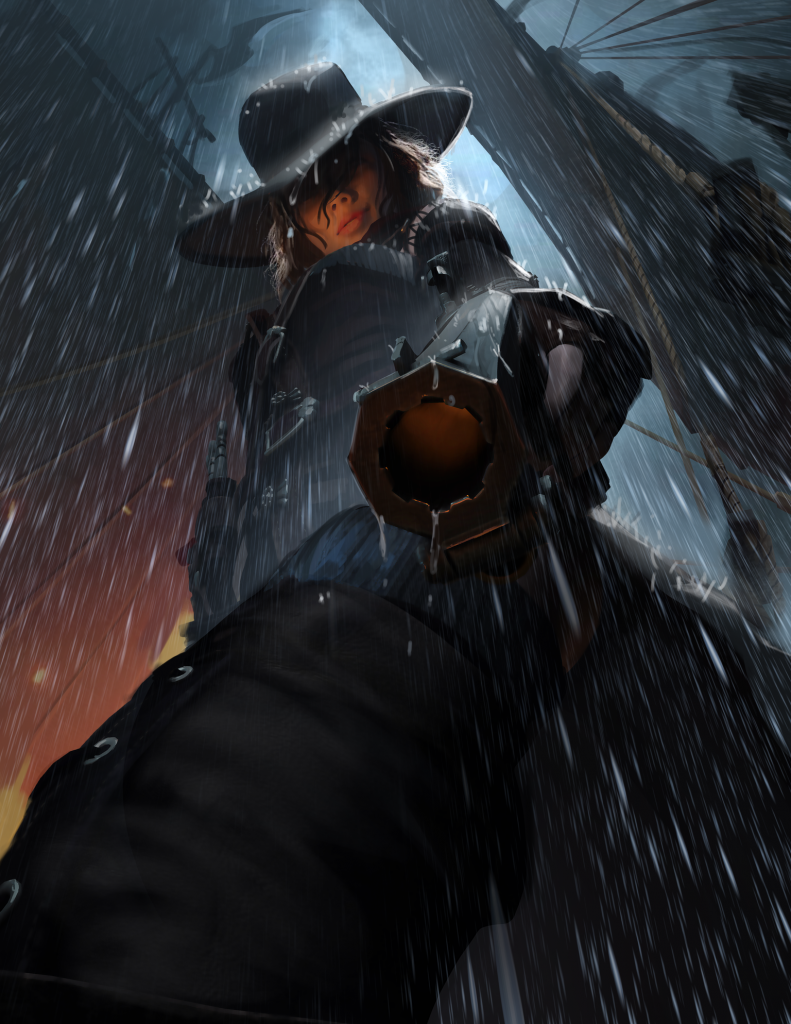 The initial box set, containing everything you need to play 7th Sea:The City of Five Sails, will follow the story of Five Sails as initially presented in the 7th Sea Roleplaying Game:

The history of Five Sails goes back six hundred years before the First Prophet. When the Numanari came conquering across this land, they found a fort built by a now-unknown warlord. They took the fort for its strategic location, erecting their own wooden walls and port. The fort eventually became a town with a castle. Stone walls ran over 5 kilometers all the way around, protecting the people from invaders. Those walls still stand, and you can see them dividing the “inner city” from the “outer city.”

Five Sails has seen its share of battles, each conflict wounding some part of the city, calling for rebuilding and restructuring. In addition to the battles, the city has suffered fires and plagues, further erasing older parts of the city for newer structures. This has made the city’s interior a bit of a maze with older buildings eclipsed by newer, tight alleyways that twist and turn and sometimes end in walls, stairways leading to nowhere and other architectural oddities.

In the 1400’s, a Vodacce prince named Dalmatia claimed the city as his own and his family held it for nearly two hundred years. However, the War of the Cross rolled over the city, and within those thirty years, Five Sails changed hands hundreds of times. As the war raged on, Five Sails became a kind of home for mercenaries and pirates looking for coin and trying to find refuge from the war.

When the Nations finally declared peace and the War of the Cross ended, the city was in shambles. Five different Nations claimed ownership of the city. Anastasia Russo, the appointed mayor, found opportunity in the chaos and declared Five Sails an independent city, free of any national hand. She gathered a handful of war-weary veterans to enforce her claim. A bold move for certain, but thanks to her army of mercenaries and a fleet of pirates, she was able to maintain her claim. Five Sails was a free city.

Since then, the city has remained both united and divided. Five Sails is divided into five districts, each maintained by a “governor” (the titles are different for each district). Every three years, the governors elect a mayor who runs the city’s bureaucracy and infrastructure. Because the mayor must win the favor of the governors, many outside the city see her as a kind of puppet holding a rubber stamp, but that is further from the truth than such scholars know. The governor assigns commanders for the city’s watch, army and navy, giving her considerable power. Those who fall under her disfavor can find life very difficult in Five Sails, regardless of their status. In other words, the relationship between the governors and the mayor is a delicate balance.

The featured cover art by Charles Urbach depicts the four musketeers available for play with the Montaigne faction, led by Odette de Dubois. Throughout the coming months we will continue to preview elements of this game as new art, fiction, and card templating become available. We are excited for this project and will be continuing to work closely with Chaosium on being part of the future of 7th Sea.

Designers Case Lopez and Robert Croy have recently been joined by Legend of the Five Rings CCG designer Chris Medico and Transformers TCG designer Case Kiyonaga as the game has evolved from the initial presentation in the The Jade Throne Podcast and version of the game shown to 7th Sea fans last year.

Those not familiar with the 7th Sea property can check it out here.

Stay up to date with news on all our projects by following the various Pine Box Entertainment social media outlets listed here.

Folks looking to join playtest can do so by emailing us at pineboxentertainment@gmail.com.