What to Expect from 7th Sea: City of Five Sails

I’m Max, one of the playtesters on the new 7th Sea: City of Five Sails card game under development from Pine Box Entertainment. Today I’ll provide a partial overview of what you can expect from the upcoming game.

But first, let me introduce myself, a game player from a rainy ol’ island known to you all as England. I’ve been playing card games for the last 12 years – I started, like most, with Magic: The Gathering and did my time travelling around for Grand Prix and Pro Tour Qualifiers. In 2012, I discovered Android: Netrunner, and the whole game changed, as I discovered LCGs in a big way. Since then, I have played almost all of them in some way, shape, or form. I’ve also done my time with some non-LCG games throughout the years, primarily Pokémon and AEG era L5R. So, don’t be surprised when, for context, I reference various other card games. So, with the boring introductions done and dusted, let’s talk 7th Sea: City of Five Sails, and some of the features you can expect. Please note all mechanics are still in development and you may find changes in the final product.

Approach cards are fundamental to 7th Sea: City of Five Sails for determining initiative for the turn. They also set your starting Panache – the stat that determines how many cards you will draw at the start of the turn. If you are familiar with the Game of Thrones LCG, this is similar to the Plot Deck. Although the effects are less dramatic, Approaches tend to enhance your game plan for the turn rather than define it.

You’ll be coming to your games armed with 7 of these Approaches selected, forming their own mini-deck. You choose one Approach each turn, and then you’re off to the races (or a deadly back-alley brawl, at the very least)!

You won’t face off against your opponent in some imaginary, theoretical battlefield. Oh no, you’ll duel it out at three locations across the City of Five Sails. These are less like the Deeds in Doomtown, and more like planets in the old Warhammer 40,000 Conquest LCG.

At each of these locations (The Docks, The Forum, and The Grand Bazaar) you will deal Neutral Cards from the Search Deck (more on that below). Control these locations to earn “Hero Points,” and also use them as the base to launch your noble (or nefarious) plans.

The Search Deck really sets 7th Sea: City of Five Sails apart from other games. Between you and your opponent sits a Neutral Search Deck. This deck is fixed, it will be the same for everyone playing the game around the world. During the game you’ll be dealing one card per Location each turn.

The Search Deck contains events, characters, and attachments for players to lay claim to. Some decks rely on the Search Deck to get their game plan going, whilst some for the most part operate independent of it. All players, however, will need to be aware of what is coming out of it each turn, as it really is full of treasures. Even if you don’t want a particular revealed card, you might just want to stop your opponent from getting their hands on it.

The heart and soul of the game takes place in the Skulking and Scheming phase. Here you will tussle with your opponent at each location, with you and your opponent alternating taking actions.

These actions form the core of the game, ranging from challenging your opponent’s characters, playing Risks (action card), and moving your characters around Five Sails in an attempt to dominate the city! The alternating action taking (I go, U go in classic gaming parlance) is core to the game. To reference the short lived Star Wars Destiny game, sequential flow makes the game feel fast and engaging to play.

Combat in 7th Sea is, dare I say it, flippin’ fantastic. You see, every card in your deck has a Riposte, Parry, and Thrust value (RPT from here on out).

Once you and your opponent are locked in combat, you’ll alternate playing these cards in a deadly, swashbuckling duel. Play a card with 1 Riposte? Deflect a damage, and send it back to your opponent. Parry? Get that damage away from me! Thrust? I’ll take the hit, but I’m slinging some of my own damage back at you. Combat only ends when there is no more damage ‘incoming’ at either player, and some of these combats become epic battles of back-and-forth card play.

Just like the Poker Hand mechanic in Doomtown, this combat system drips with theme. You feel like a Musketeer or a swashbuckler every time. It also makes deckbuilding both fun and challenging. Maybe there is a really powerful card, but its RPT values aren’t great, or there’s a lower powered card but when you’re in combat, its high RPT values allow you to dominate and win the battle. Oh, and yes, some cards have points in each RPT stat, and you get to use all of them when you play them into a duel.

Well, I hope you’ve enjoyed this little insight into the game as it currently stands. I’ve not delved too deep into the details, as we’re still thrashing some of them out during playtesting. Hopefully this has let you know some of the things you can expect. At some point, I hope to share with you all more insights about 7th Sea: City of Five Sails’ Factions, along with tips about deckbuilding and general game play strategy. 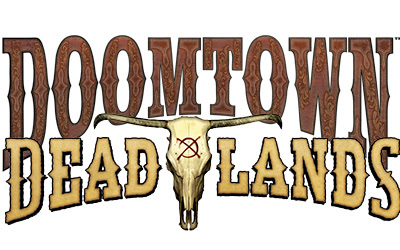 Greetings pardners! If you followed the new Deadlands: The Weird West Kickstarter, or were one of the backers, you may know fulfillment has begun on getting out the stunning new version of this beloved RPG. To celebrate, we’d like to present some ideas on how you can use your Doomtown cards, while also playing Deadlands.

Those new to tabletop RPGs or the Savage Worlds game system will find that combat initiative uses a unique system of each player receiving a playing card from a regular 54-card poker deck. Not only can you use your Doomtown cards to fulfill this function, it can also operate as a tool for the Gamemaster.

The deck featured here on dtdb.co, presents a deck that you can use for the Doomtown card game. You can also shuffle this deck to produce random dudes, deeds, goods, or events that can occur within your Deadlands game. You can either shuffle the deck and pull from it at random, or divide the piles into suits. Need to identify what weapon your baddies are using in a particular fight? Draw randomly from the hearts for your Goods! Need an NPC to appear to interact with the posse? Draw from your spades for an inspired Dude to enter the scene! 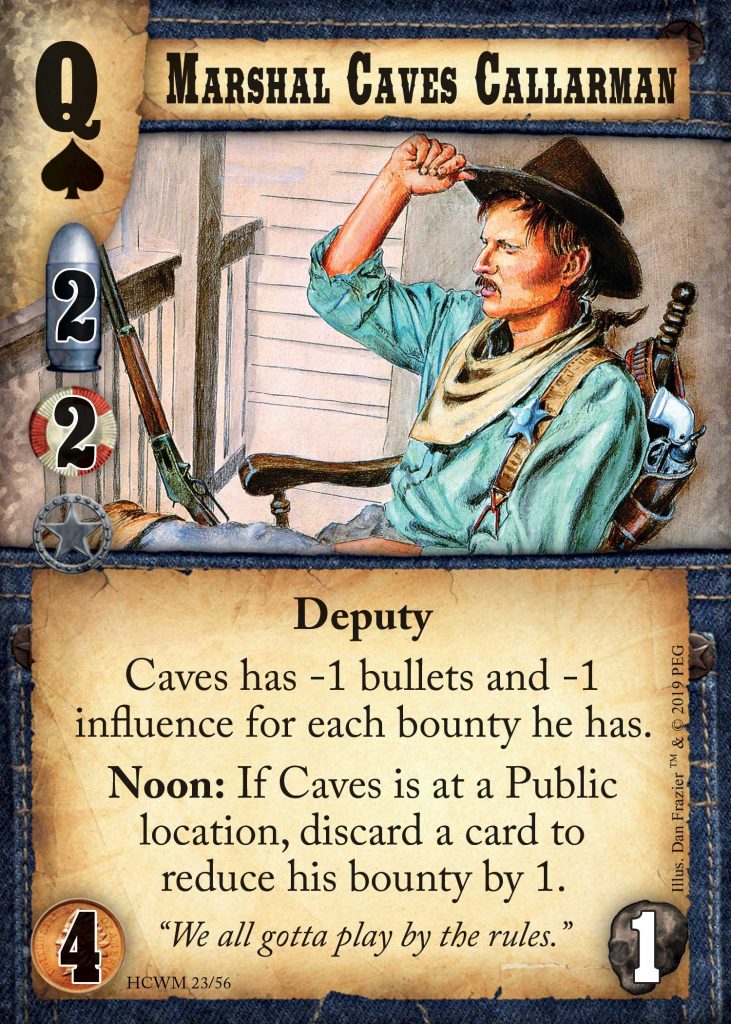 Jordan Caves-Callarman, Marshal of the WildCards Deadlands live show on Twitch, explains his usage of Doomtown cards with the RPG:

“I use Doomtown cards for all sorts of things when I’m GMing Deadlands. They can be great visual aids for NPCs or enemies like I used them in our game for the Deadlands Kickstarter, and when I ran the Twilight Protocol event games my players got a kick out of being handed cards representing items and relics they came across. There are also a ton of colorful location cards you can lay out to better illustrate the places your posse visit – set them up as you would in a game of Doomtown to create an easy map of a frontier town’s main street!

Having visual aids at the table is great, but what I really like about using Doomtown cards as a GM, are all the details. Between the colorful names, the card art, and the flavor text, there are plenty of jumping-off points on any given card for coming up with memorable NPCs, items, and locations – you can use them as-is, or just keep what inspires you and drop the rest. Grab a couple of Action cards to lay down when there are complications in your players’ best-laid plans, or use them to spark ideas for fun plot wrinkles to add to your session.” 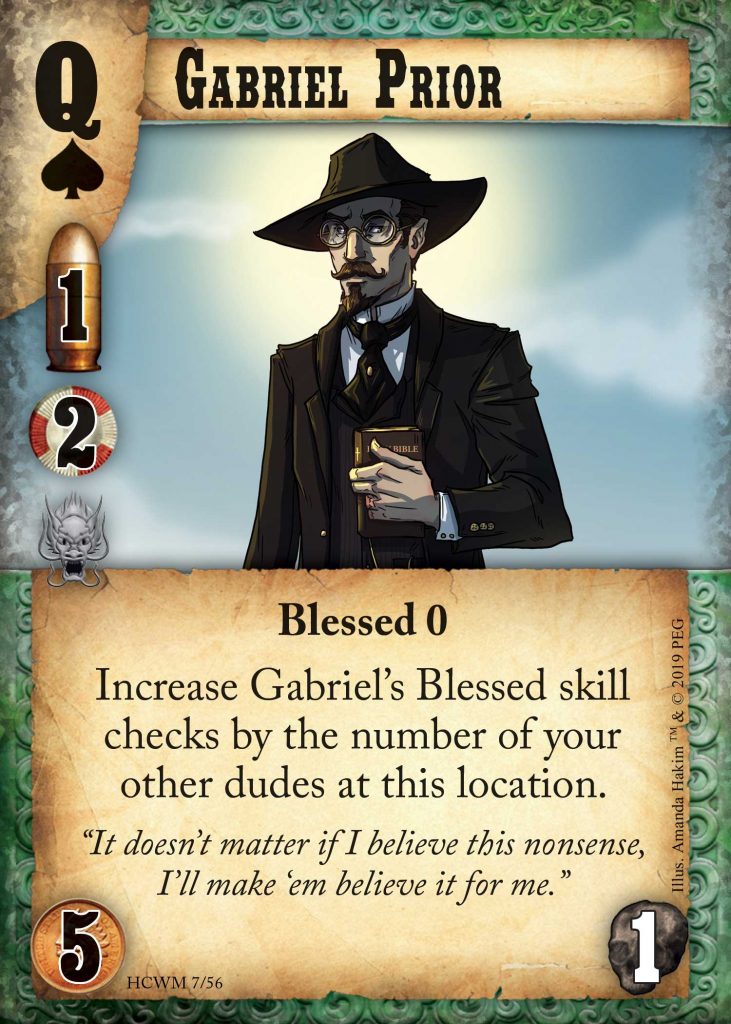 Jordan Pridgen, who portrayed Gabriel Pryor in the WildCards show adds the following:

“As an RPG player, your character is everything. Whether you’re sitting down for a single one-off session with some new friends at a convention (remember those?) or building something for a long-term campaign, you want your character to really have legs. Sure sometimes you have the perfect idea right off the bat, but if you’re a new player who isn’t used to the scope of the Weird West, or an experienced dice-slinger who feels like they want to branch out, you won’t find a better font of cool character ideas than Doomtown.

Personally, I’ve found Doomtown to be flush with inspiration. You can basically pick any dude from any set and start the sparks of character innovation burning. I mean sure if you base a character off of “Dynamite” Jacc you might want to have a spare ready, but even a card as simple as the wonderfully named “Androcles Brocklehurst” could lead you to build an old-school southern lawyer with money and connections (and maybe a little bit of corruption if you dig deep enough), who frankly I know I’d have a great time playing.

On the other end of the spectrum, the stylish masked burglar Jim Hexter, or the unconventional besuited martial artist Feichi “Suitcase” Lee, could make for unforgettable PCs with quirks that will really help you motivate and drive your personal story. Heck, I would be lying if I didn’t admit that cards like “Quaterman” and “Post-a-tron” were part of the inspiration for my character Midas Buchanan’s mechanical child “Christopher” on Wild Cards. So if you’re thinking about getting into Deadlands RPG, or even just looking for some new takes on the world, give Doomtown a look. And hey, come join us for a few games on the discord while you’re at it!” 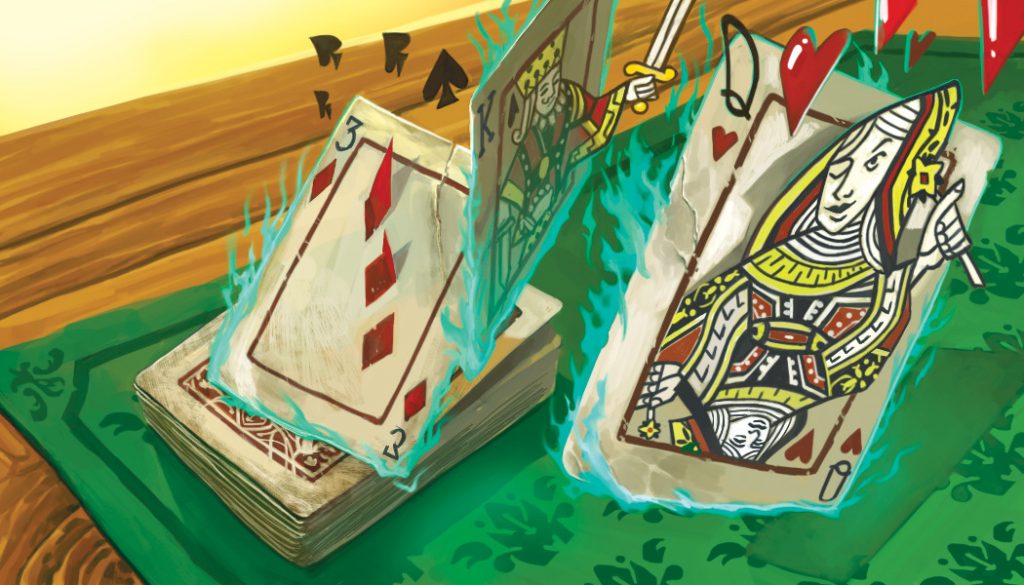 We recommend the following list to start out, or make your own pardner!

Smith & Robards Trade Show (Out for Blood): You can include this with your Clubs or Diamonds.

1x El Grajo (No Turning Back)

1x Gateway Station (Out for Blood)

1x The Town Hall (Base Set)

1x Huntsmen’s Society (No Turning Back)

1x Scattergun (Out for Blood)

1x Putting The Pieces Together (The Curtain Rises)

1x Calling The Cavalry (The Showstopper)

1x As Nature and God Intended (Welcome to Deadwood)

1x A Coach Comes to Town (Base Set)

1x A Secret Tunnel (Base Set)

Cards featured includes those up to the recent Welcome to Deadwood expansion, available now from the Pine Box Entertainment store or your FLGS!

To get caught up on the status of the Weird West as it related to Doomtown, check out our new video detailing more ways in which Deadlands ties into Doomtown!