Originally released in 1998 as a collectible card game, 7th Sea has been a beloved card game and role-playing game setting for over two decades. Now, with Pine Box Entertainment’s upcoming addition to the 7th Sea universe in the new expandable card game 7th Sea: City of Five Sails (arriving to Kickstarter on October 11, 2022), new and old players alike can return to swashbuckling and sorcery in the world of Théah!

Five Sails has been declared an independent city which no outside forces may control, so naturally, each player’s goal is to wrestle control of the city away from their opponent through economic might, dominance of the city’s strategic locations, or assassination of the opposing faction’s leader. 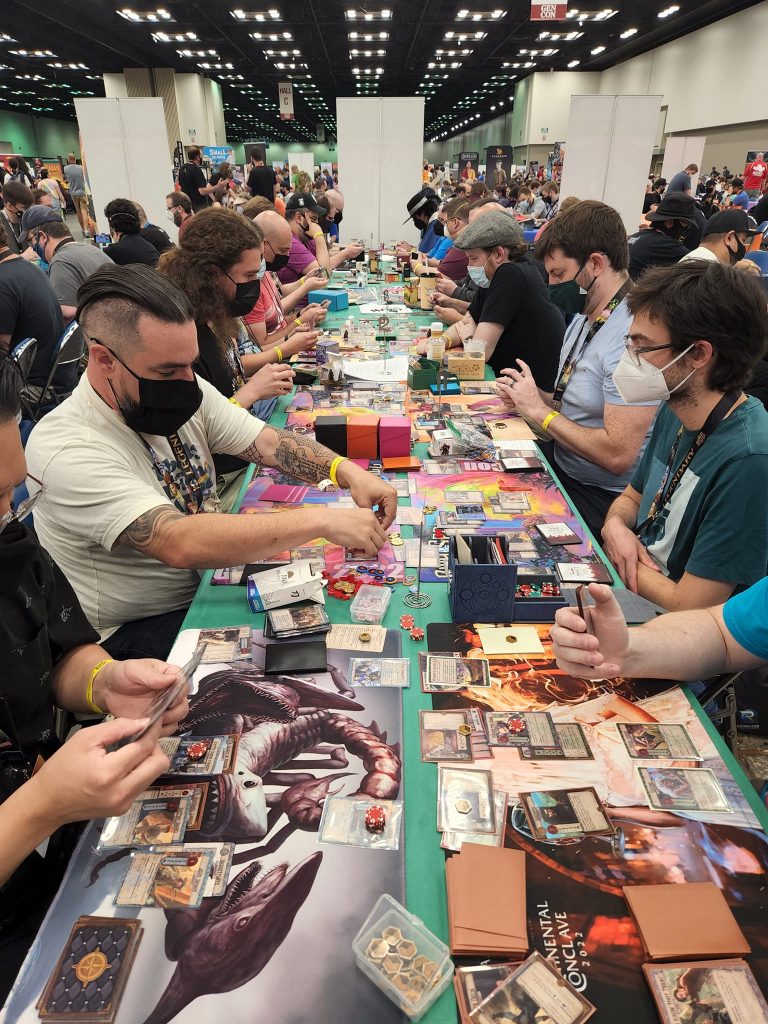 Gen Con 2022 marked the preview of 7th Sea: City of Five Sails and Pine Box hosted an inaugural tournament to honor the occasion! Sixty-five players arrived in Five Sails to brawl and backstab their way to victory in this two day tournament using prerelease starter decks. This tournament, and others like it are also Storyline tournaments, just as many of the tournaments from the 1998 7th Sea collectible card game once were. Storyline tournaments provide opportunities for players to shape the future of the City of Five Sails by allowing them to answer critical questions and make compelling decisions regarding the city and the extraordinary personalities that call it home.

For this inaugural tournament, the storyline question that needed answering was, “Is Yevgeni the Boar a hero or a villain?” 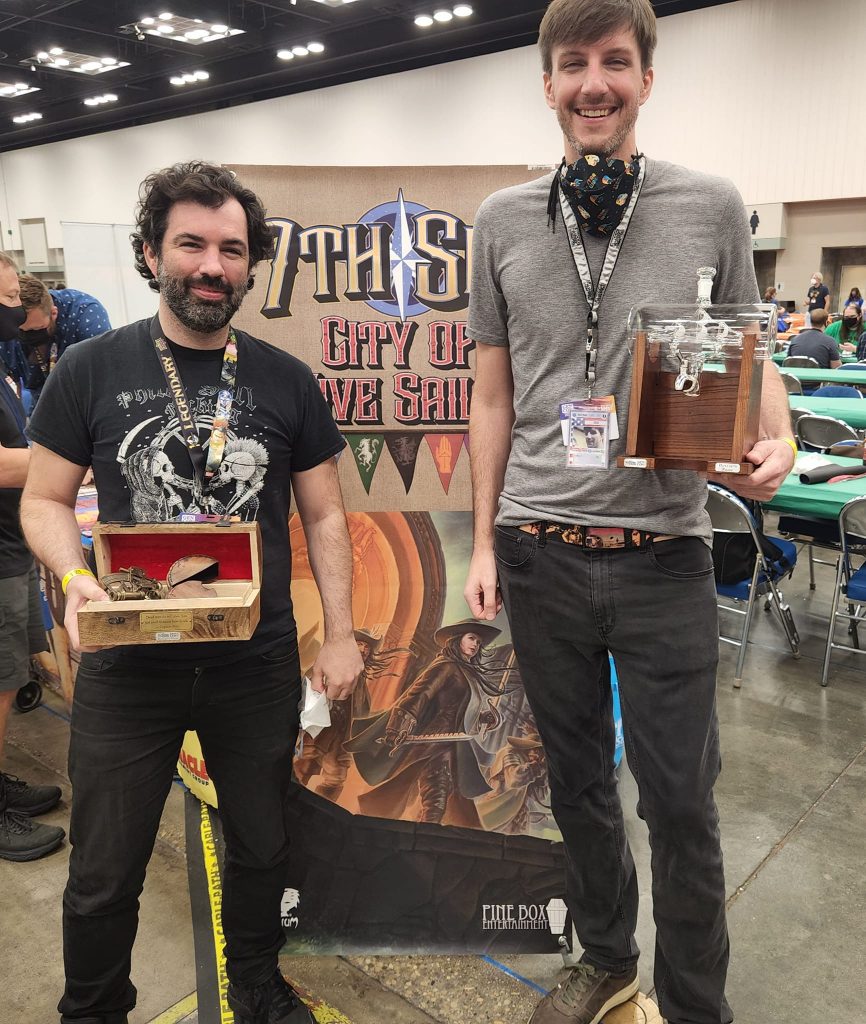 At the end of the tournament, finalists Stephen Skilton and Hayes Hunter worked together to determine Yevgeni’s moral standing and decided that Yevgeni’s path would be one of heroism. Now, the Hero subtype will be added to Yevgeni’s character card before 7th Sea: City of Five Sails hits Kickstarter this October, giving Ussura players new options to consider when building their decks.

Being a pre-release event, the inaugural tournament used pre-constructed decks. Each deck is defined by its leader, a larger than life personality that gives each deck a unique flavor and access to special abilities and specific advantages. Participants chose their decks from the five factions, each with their unique leader, that will be included in the core box. 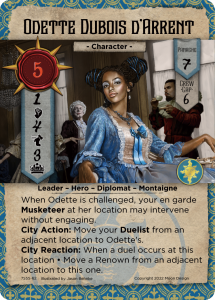 Odette Dubois d’Arrent is the most recent arrival to the City of Five Sails, but she did not arrive alone. A small but elite group of skilled Musketeers accompanies her and protects her from the rougher elements of the City. Her strengths include movement and creative positioning to make the most of her political abilities and her Musketeers’ steel. True to the musketeer phrase, “All for one and one for all!” Odette and her musketeers perform their best when working closely as a group to support one another. 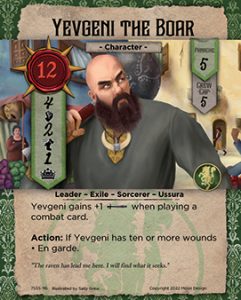 Yevgeni the Boar – USSURA
Yevgeni the Boar is a man so large and foreboding that even the elements seem to bow down before him.Yevgeni’s style is much like the man himself; bold, direct, and powerful. To earn the Boar’s guile is as good as a death sentence for most. Yevgeni prefers to get the job done himself rather than send anyone else to do the work, and his method of getting the job done most often leverages his brute force and indomitable will. The last place anyone is the City of Five Sails would want to be is in a duel with the Boar. 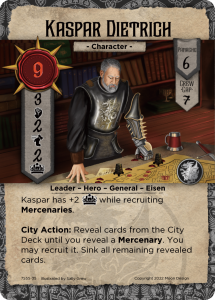 In the aftermath of the War of the Cross, Kaspar Dietrich returned home to Eisen, only to find it in ruins. Kaspar then fled south to Five Sails where he hopes to use his formidable reputation as a master commander and strategist to build an army to reclaim his homeland. Kaspar utilizes strategies that involve making use of the city’s available mercenaries for hire and ensuring they are well equipped for the war to come. Anyone caught in a conflict with Kaspar is likely to be outnumbered. 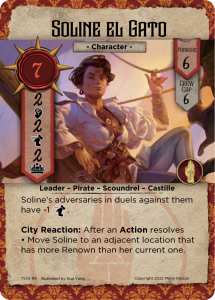 Soline el Gato – CASTILLE
Born and raised by the streets and canals of the Castillian District of Five Sails, Soline el Gato knows intimately what it takes to survive in such a city. The leader of a den of thieves and scoundrels, Soline uses her cunning and adaptability to always keep her opponents on their toes, not knowing what to expect. Soline’s style is one of disruption, making it increasingly difficult for an opponent to gain ground. 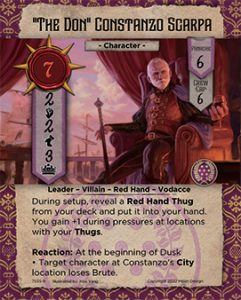 “Don” Constanzo Scarpa – VODACCE
“Don” Constanzo Scarpa loves his city, for Five Sails is indeed his city, and he is willing to do whatever it takes to protect it, even if it is from itself. Reputation, family and loyalty are the things that are of paramount importance to Constanzo as he tries to advance politically through the ranks of the city’s elite. Constanzo’s style is cutthroat and brutal where the ends always justify the means. Exploitative with his forces, the “Don” has at his disposal a pack of expendable thugs from the Red Hand gang. Constanzo doesn’t care what or even who gets sacrificed along the way so long as his plans and schemes are advanced..

The inaugural tournament saw every faction well represented, with nine players choosing the power hungry “Don” Constanzo Scarpa, another nine selecting the indomitable Yevgeni the Boar, 14 players preferring the cunning Soline el Gato, another 14 selecting the influential Odette Dubois d’Arrent, and a whopping 19 players choosing to help bolster the ranks of the revered commander Kaspar Dietrich. At the end of the tournament, Kaspar and his mercenaries emerged as the final victor.

Of course, no 7th Sea unveiling would be complete without celebrating its roots. Pine Box Entertainment hosted a retro tournament for the 7th Sea Collectible Card Game with 22 participants to recognize those fans of the game who are still playing almost two decades after the game’s cancellation. The winner of this retro tournament was none other than Stephen Skilton, one of the finalists in the City of Five Sails inaugural tournament!

7th Sea: City of Five Sails sets sail for Kickstarter on October 11, 2022. Click the link below and then click “Notify me on Launch” to stay up-to-date and not miss your share of the plunder!