7th Sea: City of Five Sails is an expandable card game set in the swashbuckling world of Chaosium’s 7th Sea roleplaying game by John Wick. Players control one of five factions as they fight to influence, control, and explore the independent and unruly city of Five Sails. It is typically played with two players, but multiplayer variants will allow more players to get into the game.

During the game, each player represents a leader who, along with their allies, explore locations and fight both with swords and with wits for overall influence over the city. Along with each player’s individual deck, 7th Sea: City of Five Sails also includes an element of randomness in the form of a separate, shared deck that represents the city itself with unusual characters, items, and events that change the  focus of the game. Combat is resolved in a unique “back and forth” style reminiscent of challenging swordplay.

Odette Dubois d’Arrent is the most recent arrival to the city. She is a courtier from Montaigne, a country that does not have a district or established foothold in Five Sails. She is tasked to help her patron expand his influence within the free city. As such, she is eager to find allies. But she did not arrive in Five Sails alone. A small but elite group of skilled Musketeers accompanies her and protects her from the rougher elements of the City. Her strengths include movement and creative positioning to make the most of her political abilities and her Musketeer’s steel. 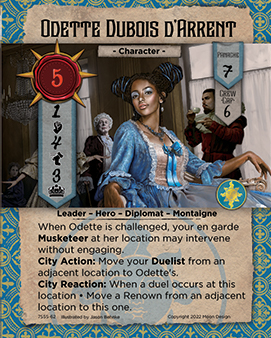 Yevgeni the Boar is a man so large and foreboding that even the elements seem to bow down before him. He has become something of a folk hero in the eyes of the Ussuran district and his reputation as such extends well beyond the cast of his shadow. He is not native to Five Sails, but has no memory of his life prior to his arrival. Because of this he searches for the answers of his past. Yevgeni’s style is much like the man himself; bold, direct, and powerful. He prefers to get the job done himself rather than send anyone else to do the work. 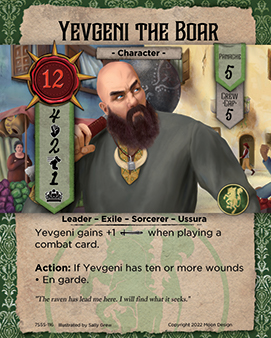 An accomplished General in the War of the Cross, Kaspar Dietrich returned home to Eisen, only to find it in ruins, overrun by monsters. As such, he has a passionate distrust for all things sorcery and supernatural. Kaspar fled south to the port city of Five Sails where he hopes to use his formidable reputation as a master commander and strategist to build an army to reclaim his homeland. He utilizes strategies that involve making use of the city and the mercenaries and equipment available to him. 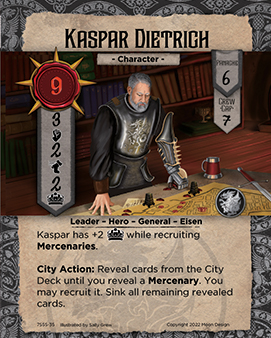 Soline el Gato grew up on the streets and canals of the Castillian District of Five Sails and knows intimately what it takes to survive in a city such as Five Sails. The leader of a den of thieves and scoundrels, Soline uses her cunning and adaptability to always keep her opponents on their toes, not knowing what to expect. Soline’s style is one of disruption, making it increasingly difficult for an opponent to gain ground. 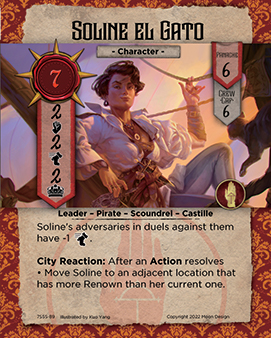 “Don” Constanzo Scarpa loves his city, for Five Sails is indeed his city, and he is willing to do whatever it takes to protect it, even if it is from itself. Reputation, family and loyalty are the things that are of paramount importance to Constanzo as he tries to advance politically through the ranks of the city’s elite. Constanzo’s style is cutthroat and brutal where the ends always justify the means. Not caring what or even who gets sacrificed along the way as long as it advances his goals. 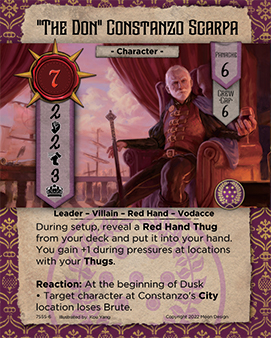 In keeping with Pine Box Entertainment’s mission to make our card games more accessible digitally, 7th Sea: City of Five Sails, is now available for online play via Tabletop Simulator. You can even play the game now, before the Kickstarter campaign. LAST RULES UPDATE: 7/27/22

7th Sea Demo Print and Play –  Print out 2 faction decks and the city deck to get started.

By D.G. Laderoute  I pride myself on finding things before they are lost. --Soline El Gato “Aren’t you drunk?” Soline glanced sidelong at Sanjay and grinned. “Very. Why?” “Because I think you’re walking straighter than I am.” Soline laughed, but a burst of hurdy-gurdy...

END_OF_DOCUMENT_TOKEN_TO_BE_REPLACED

by Fred Wan Kaspar practiced. Every morning, without exception, Kaspar made the time to train. The exercise helped to wake him up for the day to come, before the morning sun became uncomfortably hot. So, in the quarters he and his wife Daniella shared on the top floor...

END_OF_DOCUMENT_TOKEN_TO_BE_REPLACED

by Nancy Sauer Odette de Dubois d’Arrent surveyed the room with a quick sweep of her eyes. The parlor looked much the same as it did on her previous week’s visit: well-made but not ostentatious furniture, an embroidery frame with a newly-begun project in the corner,...

END_OF_DOCUMENT_TOKEN_TO_BE_REPLACED

The Art and Story of 7th Sea: The City of Five Sails

Cover Art by Charles Urbach   My name is Case Lopez, Designer and Creative Director for Pine Box Entertainment’s new original card game, 7th Sea: The City of Five Sails. My job focuses on themes that bring the writing, design, and art into one cohesive vision....

END_OF_DOCUMENT_TOKEN_TO_BE_REPLACED

We are Ketal and Hastur, two French playtesters for 7th Sea: City of Five Sails and we are honored to discuss this upcoming expandable card game from Pine Box Entertainment. Here we present the City Deck, one of the core mechanics of 7th Sea: CIty of Five Sails. As...

END_OF_DOCUMENT_TOKEN_TO_BE_REPLACED

The Aesthetics of 7th Sea: City of Five Sails

By David Lapp and Rhiannon McCullough From the Weird West to Théah, adding a new card game to Pine Box Entertainment’s lineup has been quite the adventure. When we continued Doomtown, we already had an established game to move forward on. Creating one from scratch...

END_OF_DOCUMENT_TOKEN_TO_BE_REPLACED

What to Expect from 7th Sea: City of Five Sails

END_OF_DOCUMENT_TOKEN_TO_BE_REPLACED

An Evolving Tabletop Game set in Theah's Most Interesting City Cover Art, by Charles Urbach Pine Box Entertainment is proud to announce the development of a new experience for 7th Sea fans in the form of a hybrid card game/board. Folks familiar with our Doomtown game...

END_OF_DOCUMENT_TOKEN_TO_BE_REPLACED

Keep up with the latest 7th Sea: The City of Five Sails news!