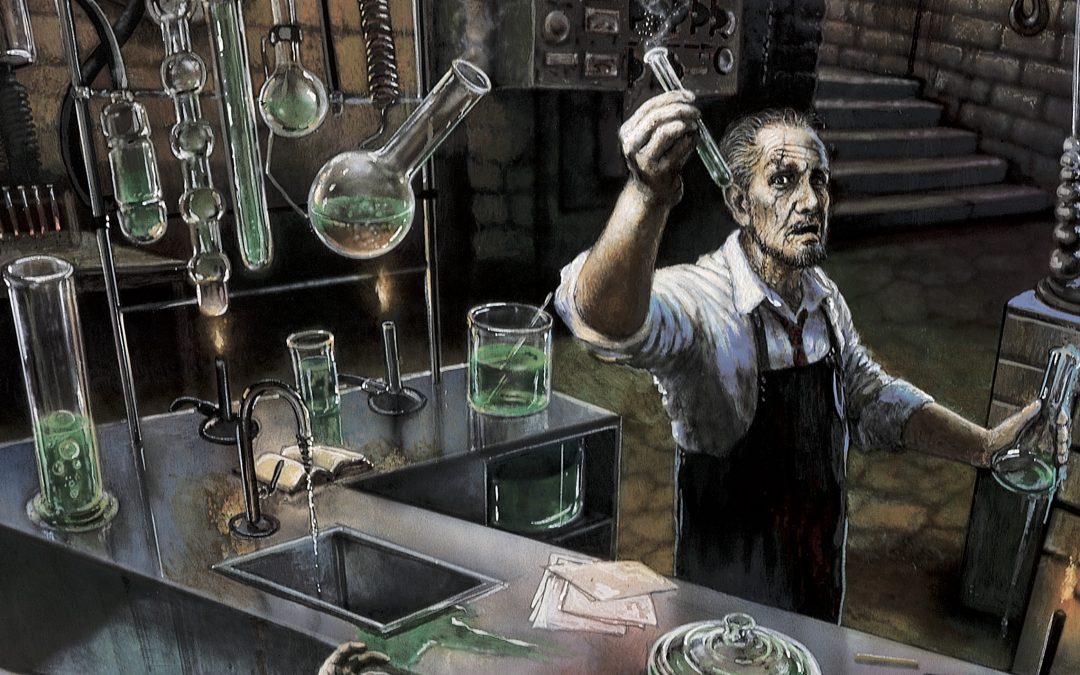 Last week’s feature on the origins of Pine Box introduced our hard-working playtest team. This time, I’d like to recognize my compadres in upholding the law of Gomorra, the stalwarts of the Rules Team. These folks work behind the scenes verifying that wording on the cards for our upcoming set, Tales From the Epitaph, are printed with design intent in mind and reflect the card as it was tested. While Pine Box finishes up Tales from the Epitaph, we also have the responsibility of maintenance of the overall Doomtown: Reloaded legacy. Peacekeeping these days involves responding to community rules questions, and updating DT:R tournament floor rules and FAQs.

How did the Rules Team come about?

We initially approached three individuals (Scott Wisely, Landon Sommer, and Alan Sarkisian), who are part of their respective playtest teams. All three have previous experience running tournaments and serving as a Head Judge at major events. This team has DT:R experience, but also provided a fresh set of eyes on rules moving forward as we advance Gomorra into the world of greater Deadlands. These folks reviewed and approved the most recent changes that Pine Box submitted along with the first draft of TftE and now housed at Pine Box’s website and forums.

How does Rules Team go about addressing player’s questions?

Our team actively monitors the Rules Questions and General forums on Pine Box Entertainment site as well as the Doomtown Facebook group. A member will respond to basic questions, but sometimes the team will need to huddle behind the scenes. In addition to advanced rulings or complex/unforeseen interactions, players bring up issues that the original rulebook did not clearly define. After internal discussion that often includes other members of the Playtest teams, the Rules Team arrives at and posts the agreed upon consensus ruling. Often you will see a response on the forums from a member of Pine Box or the Rules Team noting that the rules team is discussing the issue. We want you, the player base, to know we’re addressing the issue. This most recently came up with a question about Jack O’Hara and Full Moon Brotherhood: if Jack loses his trait via the Brotherhood ability while having 2 weapons attached, what happens? In consulting with members of the previous Rules Team under AEG, we found that this was something they wanted to address, but weren’t able to after AEG had discontinued DT:R. The Rules Team not only discussed and answered this question (see forum post), but also further adjusted the comprehensive rulebook.

What were the major changes to the Floor Rules and Errata?

You may have noticed we issued three new errata at the launch of Pine Box Entertainment, starting with The Undertaker. Not only does Rules Team have to keep an eye out for potential issues with upcoming cards, but also how they interact with previously released cards. While there were fun combos that involved acing dudes from hand for Ghost Rock via the Gomorra Parish, Eagle Wardens outfit ability, Buried Treasure, etc., the Playtest Team found possible ways to abuse this with upcoming card. Rules Team thus made the change specifying that the Undertaker only receives money from dudes in play. Next up was the Auto-Revolver. Savvy players caught on that the trait from this item had a global affect that worked even when the revolver was not actually in a fight. The Rules Team believed this item should have the Weapon trait, only functioning in shootouts where actually present, bringing it in check with other weapons in the game. The last major change was to poor Rico Rodegain, who was dropped to zero influence. Rico’s amazing ability to scout opponent’s opening hands made him an auto-include in many decks. Zero influence helped nerf strong blitz decks that used knowledge of an opponents’ opening hand to initiate ‘all in’ tactics, particularly with Barton Everest and knowing the opponent lacked cheatin’ punishment. Leaving Rico with the ability still allows you to adapt, but with the penalty of losing some influence that your opponent could potentially capitalize on.

Changes to the floor rules included increasing the round time limit and revising the points gained for matches going to time. As with any ruling, the Rules Team and Pine Box will actively monitor upcoming tournaments to make appropriate changes that enhance the organized play experience for all Doomies. The change to 55 minute rounds allows more time for games to finish without resorting to tie breakers. In the recent Edinburgh Sheriff event, only one match went to time, and the feedback we received was that those few extra minutes helped some games not resulting in a tie. Awarding less points to timed wins penalizes decks that often purposefully go to time, such as the Morgan Turret deck, or ones focused on building up Influence to draw out the game. As with any game, stalling can be a concern, and we will do everything we can to minimize that negative experience for tournament players. Our team is currently working on an article for Player Judges and Tournament Organizers with a strong focus on this particular issue.

What is the Rules Team currently working on?

The Rules Team anxiously awaits the upcoming European Championship and Epitaph events. They will monitor these events and consider adjustments to the Floor Rules based on community feedback and personal observations. Rules Team also coordinates with the Playtest Teams on possible errata that address issues we’ve seen with some of the more powerful cards at tournament events. One example is the 108 Worldly Desires outfit ability. We’ve gotten a lot of community feedback and are working on the best way to adjust any potential change to this card. Instead of simply ‘issuing errata’, post-TftE handoff, Pine Box intends to coordinate Rules and Playtest to actually test cards in real decks/games under their proposed revised wording.

Thanks again for listening cowfolk, and keep a lookout for more upcoming Tales From the Epitaph previews. 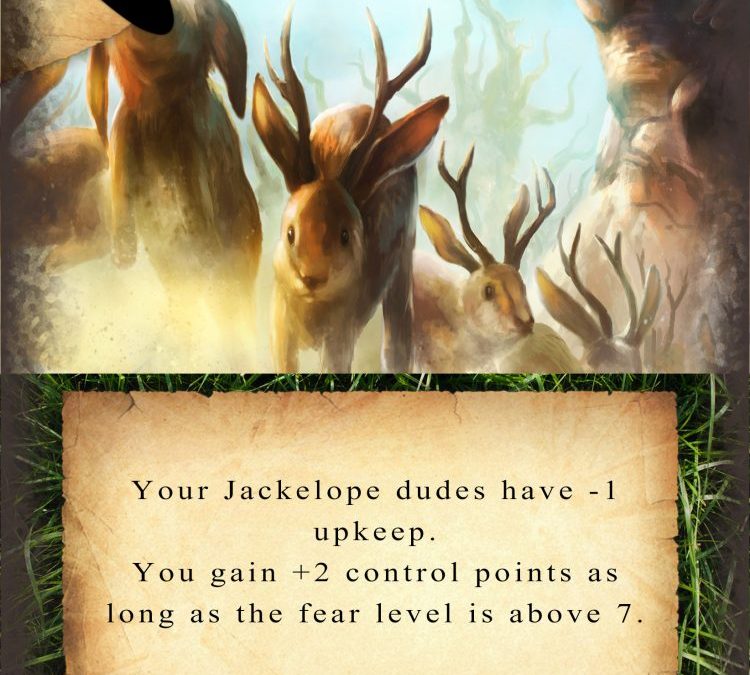 “Courage is resistance to fear, mastery of fear – not absence of fear.” – Mark Twain

Now before you get all twisted up inside, allow me to explain our decision. We wanted to bring back something from Classic. Early discussions included Card Memory, Table Wide Uniqueness, and removing the deckbuilding restriction that only allowed 4 cards of any suit. None of it felt quiet right . (As an aside, we were REALLY fond of Card Memory in early tests. We even had a concept where effects that would use this rule came with a set of stickers to permanantly change your cards.) Then we discussed Fear Level.
After a few games with some of our upcoming Tales from the Epitaph cards we were certain we’d found the sweet spot. After much discussion we decided the best way to capture the flavor of fear was to create an entire faction dedicated to the mechanic. (Emre WAS NOT a fan of this proposal. We made him do it anyways.) This faction in playtest was called [Carrot Stick] and as it evolved we knew the faction was always fated to become The Stampede. How does it get much scarier than Jackelopes? Answer – it doesn’t. We felt that we wanted the dudes and actions in the deck to do the talking so we gave this home a completely passive ability.  Jackelope is a new keyword, akin to Deputy – exclusive to the outfit and does nothing on it’s own. Expect a bushel of new cards to support them though.
But wait, how does Fear Level work?

It’s important to note, the Fear Level can never fall below 1 and never rise above 7. These numbers are completely arbitrary and only serve to frustrate our Design and Playtest teams.

But wait, I want to know more!

Of course you do. Fear Level is AWESOME, but we don’t wanna give too much away just yet. We’ll be revealing a bit more in the coming weeks as well as updating our rules documents to reflect the change. But until then, just gonna have to wait.